For the past three weeks, I had the pleasure of spending my time working with HCU and staying with a superhero named Kevin Okumu. I traveled to Uganda with two fellow Tarheels, Mia Hodges and Saelar Venters, both of whom are fabulous people that I wish everyone had the chance to know like I do.

Since it was my first time in Uganda (and Africa), the culture shock was real: especially because I was seeing my first glimpses of the new country at night, which can be confusing to a traveler’s red-eyed, crazed mind. We were immersed into Gulu’s culture and its extremely kind (to say the least) community. Every morning when we left to go work, we would be greeted by the local kids in Koro (Kevin’s village) who would run up to the car yelling and smiling, which I believe can make anyone into a morning person. 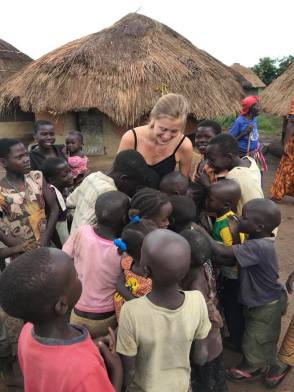 The majority of our time was split between going to various villages to help implement/improve the current microfinance program and teaching at the HCU school. Between those two, it’s difficult to pick a favorite because that would mean choosing between seeing the ecstatic (and adorably mischievous) kids in the classroom and meeting local mothers receiving loans whose abundant gratitude reassured us all that the program was achieving its goal in helping them. The women who work with HCU: Grace, Esther, and Miriam, are all legends in their own right and run a nonprofit exactly the way it should be run, with kindness and the will to make these communities the best that they can be. In all, my experience working with HCU was enlightening and fulfilling all around.

I mentioned above that I stayed with a superhero and leaving her out of this reflection would be a terrible mistake. Kevin Okumu wrote the book on being a Girl Boss. Writing about the hospitality and even love that she shows to her interns seems almost like a waste of time because no description can do it justice. Hearing from other people in Uganda about how much they love Kevin and how much she has helped this person and that person were odes to her generosity. The other interns and I sometimes asked ourselves, ‘What would we do without Kevin?’ Did we really even want to know the answer to that question? Absolutely not. She is incredible and I consider myself very lucky to have gotten to know her so well. There is no doubt I will be paying her and the rest of HCU a visit again!